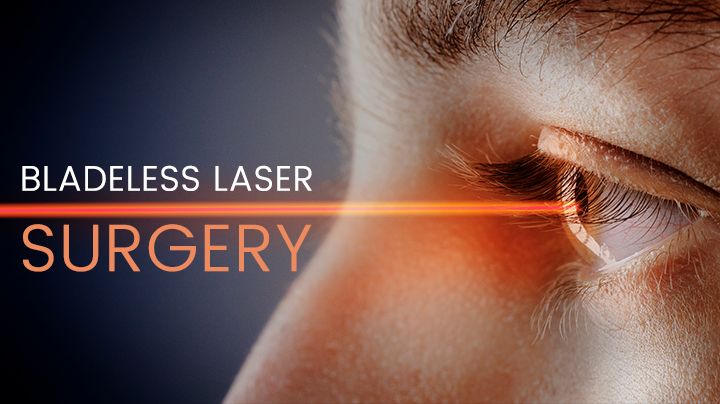 Many people suffer from various types of eye disease like glaucoma and cataract. Most of the eye patients go to an eye clinic for treatment where an ophthalmologist or an eye specialist take care of their eyes. For cataract, an ophthalmologist will ask you to undergo an operation which might be traditional, or laser-based. Bladeless laser cataract surgery is better than the traditional one because it is accomplished via laser which is very accurate, and the entire procedure is painless and stitchless.

What is Bladeless Laser Cataract Surgery?

If you want that an eye specialist performs an operation with your eyes but you’re afraid of pain, blades or stitches then laser surgery is definitely for you. In bladeless LASIK or Femto LASIK, the surgeon will use two types of lasers for the vision correction procedure. First, an ultra-fast femtosecond laser is utilized to make a thin flap in the cornea which is the clear front surface of your eyes.

Next, an excimer laser will be used to reshape the underlying corneal tissue to treat and correct your vision. After this, the flap will be returned to its original position. The femtosecond laser will eliminate the requirement for a bladed surgical tool which is known as the microkeratome to create the corneal flap in eyes. So, now you know that no surgical blade of any type is needed in all-laser or Femto LASIK.

Know more about What is Laser Cataract Surgery?

1. Safer Procedure: Femto laser surgery is safer than the traditional oneas there is no chance of any possible human error. The incisions are controlled by laser and are super accurate in terms of depth and architecture.

2. No Cell Damage: A survey shows that not even a single endothelial cell is damaged during the Femto laser cataract surgery. This is good news because endothelial cells are also known as the barometer of our eye health and they preserve the clarity of cornea and they are non-regenerative in nature.

3. Precision Mapping: Beforehand Femto surgery, the laser system permits an ophthalmologist to make a 3D mapping of your eyes which helps in achieving highly precise results.

4. US-FDA Approved: Femto laser surgery is 100% US-FDA approved which shows its credibility. After receiving the accreditation, such laser surgery systems are also made available in India.

5. Improved Vision: Conventional Phaco only addresses the existing cataract problem and it doesn’t have any impact on pre-existing astigmatism. Why? It is due to the abnormal corneal curvature. But on the other hand, Femto laser also corrects the pre-existing cylinder in a patient’s eye, with the help of astigmatic correction module there by resulting in a better outcome as compared to conventional Phaco.

During conventional phacoemulsification surgery, an eye specialist will make the incision in the cornea with the help of a metallic blade.They also have to manually create an opening in front of the lens capsule to avail access into the cataract affected area which is achieved via a handheld ultrasonic probe. In bladeless cataract surgery, the Femtosecond laser is used to create incisions, make openings into the lens capsule, and divide the lens into fragments. Henceforth, the minute fragments are removed with the help of ultrasonic probe. In the end an intraocular lens is placed inside the eye to replace the natural lens that was removed.